RWA/NYC is pleased to announce that the 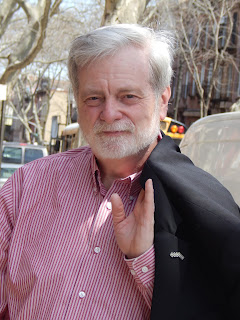 Michael has been a faithful and strong member of RWA/NYC for over a decade.  Recently, he has served as Chapter Secretary.  He also hosts the weekly Writing Sprints on our Chapter Facebook page, and has organized the Chapter's table at the Brooklyn Book Festival for several years. RWA/NYC thanks Michael for his continuing years of service.

It seems apropos for Michael to win the award, which is newly named for RWA/NYC's Founding Mother and First Chapter Secretary -- Kathryn Hayes. In addition to organizing and launching Romance Writers of America, New York City, Inc. in the early 1980s, Kathryn made it her job to welcome new members and was often a workshop speaker. Kathryn was best known as Kathryn Hitte, children's books writer.

Congratulations to Michael on this honor.