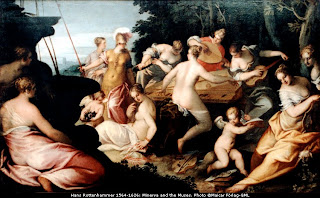 Greek legend has it that Zeus (whoremonger that he was) stepped out on Hera, his long suffering queen, and decided to spend nine nights with Mnemosyne the goddess of memory. I’ll bet you anything she wished she could forget that night especially when she found herself pregnant with nine babies——all girls.

There’s simply no way she could be happy about having to push out all those little divine beings through an opening the size of a skirt zipper——but I digress.  So being the product two deities these little ones weren’t your everyday run of the mill-tear-up-a-mall in 1.5 seconds little kids——they were The Muses.

Now I’m sure you know, or can look up the names of them all, but the ones that concern us literary creative types might be Calliope (Epic Poetry), Clio (History), Erato (Love Poetry), Melpomene (Tragedy) and Thaleia (Comedy). 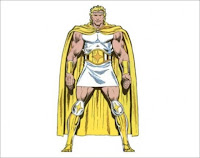 You have to understand these girls; they were used to the good life. They lived on a sacred mountain with other gods for goodness sake, and according to Wikipedia they had that lazy and uber-vain Apollo as their teacher and spent a great deal of the time frolicking in the woods while he played his Lyre, or THEY played his Lyre for you erotica writers. (Okay! that was my bad).

As time went on, humans stopped believing in the gods and like everything else that no longer holds interest, they ceased to exist as a reality. So I figure before the big mental heave-ho really took hold, Zeus told his nine little moochers(The Muses) that they had to stop counting on him and go out and get a job. “You are inspirations of fine arts, writing, music, dancing, so go out and motivate damn it.”

So down to earth their essences came. At first, they were so happy to be of help that they went crazy and inspired their diaphanous little togas off as they sprinkled all kinds of creative joy juice onto the likes of Nora Roberts, Stephen King, and James Patterson to name a few.

This went on for a while, and suddenly ordinary people (that would be you and me); decided we wanted to write as well. So The Muses sat around talking and said, “Oh what the hell!” And soon regular people started getting published too. Oh Joy! Juices began flowing like wine out of a magical endless bottle as computer keys tapped and words filled the screen like bugs on a sticky bun.

If you’re anything like me, you probably get writing jags so severe that you sit for hours and just pound those keys like you were making pizza dough for an army.

Then out of nowhere——all of a sudden, WHAM! You stop!

There’s nothing except the blank portion of your screen and the cursor blinking at you like an annoying little gnat that won’t go away. You wonder what the hell happened, after all, you were doing fine a minute ago, a day ago. But now there’s just fuzz in your brain where words should be. 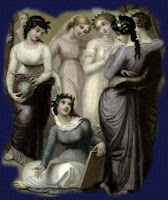 Well fear not, I have good news. It’s not you. It’s those Muses.

First you have to understand why they wander in the first place. They’re women, they like to shop, they like men, and so off they go in search of both, just not necessarily in that order.

The thing is, sometimes their absences can have a detrimental effect on your writing psyche. You start doubting. Is it good enough? Should I re-write the first chapter? The second chapter—— The whole book? Can I in fact even finish the darn book?

So while you wait for your missing Muse to return, you go back and edit, and re edit and then edit some more. You take out, put in, change and (thankfully correct words like form when it should be from), all the time wondering if your novel will ever be good enough.

I’m here to tell you not to fret. The muses are playful, egotistical deities that like to be stroked, coddled and worshiped, so forget about them for a while. I guarantee they will be back because you know the Olympian gods never like to be ignored.

Okay, so what do you do in the meantime? Take a walk. You’ll be surprised how fresh air will relax your overtaxed brain cells. Yoga is good, but the stay away from the lotus pose thingy, most thighs are not made to be in the shape of a pretzel.

Write something else. Start another book, a story, a poem or just write about the little brown dog and the boy that jumped over him——anything, but do it  e v e r y  s i n g le  day. Trust me, your muse will come running back like her butt was on fire and you have the last water hose in the world. Before you know it you will be back to writing like you never left.

However, if none of that works, email me -- pattkal@yahoo.com -- I promise to get you back on track, and besides, I know where those heifers hang out. Happy writing.♥

Patt Mihailoff was named Author of the Year by the Romance Writers of America New York City Chapter in 2009. She is the author of SINGLE HEART, SINGLE LOVE and RING DANCER’S DESTINY from Cerridwen Press. Patt also partners with Kathy Quick under the pseudonym P.K. Eden. Their book FIREBRAND will be released in paperback in May 2010 from Wings Press. Visit her – and the Muses – at http://pattsnewsyreview.blogspot.com/.

This article first appeared in the Liberty States Fiction Writers newsletter in February 2010.
Posted by Native NYer at 5:11 AM