THE MUSE AND THE SINGLE WRITER: In Search of Real and Fictional Heroes

Hello, Everyone!   How lovely to be here today. We romance novel fans are a close-knit bunch. So I’m sure you won’t mind if I talk a bit about my love life. Right? Here it goes.

Raise your hand if you can relate:

It’s Saturday night. You’ve got a date, but it’s with your dog. Handsome and adorable though he may be, he could use a bit of grooming. Your destination? Your lumpy couch. You turn on the TV and stop flipping through the channels when you land on HGTV. There’s a perky couple shopping for / renovating / decorating their first house.

They’re younger than you are.

You’re already in a mood because an old friend from high school found you on Facebook, and her profile picture is of her in a wedding gown. Or worse – holding a cute little baby.

The jealousy makes you want to stick a fork in your eye.

The thing is -- if you happen to be a writer, those moments when you feel like your heart has been ripped out and run through a cheese grater aren’t as isolating as you might think.

But we're all talking about the same thing -- The Muses.

In response to my worst moments of heartbreak and despair (and there have been several since my colleagues started "The Search for The Lucky Mr. Mel”), The Basement Divas adjust their tiaras, lean back on their divans, take a sip of their mimosas, and bask in the schadenfreude.

I know, I know. They sound mean. But really, we’ve got quite the symbiotic relationship.

You see, I give in to their demands for pretty sticky notes and pens with glittery ink and let them take control of my iTunes account, and in return, they take the juiciest pieces of the mess that is my love life and tuck them neatly into the plot of the story I’m writing.

Here, dear friends, are some highlights:

So I was seeing this guy. I wasn’t planning to go out with him, but a mutual friend from our synagogue insisted that I should.

I did. He said and did some sweet things, so I continued to give him second chances, even after I realized that, in addition of his lack of manners, there was a definite lack of sparkage.

Fast-forward to the night my dog Hamudi (aka “Creature”) jumped onto his lap. I grabbed my camera so I could take a picture of my men. Then, Mr. Wishes-He-Were-Lucky-Enough-To-Be Mr. Mel proceeded to push Creature off his lap and ask to borrow my lint roller.

He also told me he wasn’t a fan of garlic, which meant he wouldn’t appreciate my fabulous hummus. Yeah. He was toast. Or, quite possibly, a vampire. Whatever. I dumped him. And then I found out that our friend had spoon-fed him 90% of his sweet lines. So much for that. However….How cool was the Cyrano thing? It gave me at least a thousand words.

I’m thrilled to report that the hero pushing the heroine’s dog off his lap worked like a charm. Talk about your internal conflict! (I promise, the story got deeper than that, but it was a start.)  And here’s some gossip for you. Last I heard, Synagogue Guy is engaged, which, I’m sorry, is nothing but proof that there is, in fact, a lid for every pot.

True story: Personally, I blame old New York City buildings for this, but I don’t have the best history with locks.  Which is why, last December, I had an unfortunate incident wherein I found myself stranded on my stoop at midnight. Now, we won’t talk about the fact that I’m never, ever out so late. Actually, except for work and dog walks, I’m never even out. But I digress.

Point is, it was midnight, and I was exhausted, freezing and alone. I ended up at the fire station (long story) where I had the fortune to be in the same room with a bunch of firefighters dressed in FDNY t-shirts and boxers.

(Shall I give us all a moment to enjoy the mental image of this and pick our jaws up off the floor?)

Anyway, the two hunky Nice (Possibly) Jewish Firemen were completely useless when faced with the broken lock. Plus, it turns out they weren’t so nice after all. They left me standing there to freeze to death.
Enter Noah, the Nice (Definitely) Jewish Locksmith who arrived at 2 a.m. and wowed me with his sexy Brooklyn accent and lock picking abilities. He also hit it off with Creature, once the door was open.

Some say I should’ve invited him up for a cup of tea. Alas, I did not, and barring more lock troubles, he’s gone from my life. Just when I accepted the fact that with my luck, it would behoove me to marry a locksmith. . .

But wouldn’t it be a blast to rewrite history and turn all that into a novel?

In the novel version, the firemen on that freezing night don’t leave the heroine stranded on her stoop (and who are we kidding – initially, when the heroine finds them at the station, they’re wearing only boxers due to a broken radiator or midnight workout).

The locksmith and the heroine happen to run into each other the next morning as they’re walking their adorable dogs. And when the firemen show up to rescue the heroine from a smoking waffle iron, she looks gorgeous in a flowy nightgown and her curls are magically non-Medusa-like even though it’s 5:30 in the morning.   Oy, the possibilities!


The Techie and the Geek

So my colleagues want I should get married. I teach in a tiny Hebrew day school in Brooklyn, if that helps you paint a picture. Anyway, I should be so lucky.

As I said, I teach, and I happen to be the computer teacher. So you can see where I’d think it might be nice to find a Giles to my Ms. Calendar. (And I work in a library, a natural habitat for a Giles.)

I didn’t think much of it when I first started working there last year, but there was a kind of Giles-like (meaning a little geeky) teacher next door to me. There were comments made, and power of suggestion caused me to realize that he did indeed meet a lot of The Lucky Mr. Mel Criteria: 1. He preferred Mac to PC (fine, so I’m a geek too), 2. Our religious practices weren’t so far apart, and 3. He was a musician (which I would not have known if I hadn’t accidentally found a playlist of his band’s songs on one of the school’s laptops. Which I accidently blasted in front of the entire school. Whoops.).

I was willing to overlook the fact that he wasn’t that tall (I need a tall guy – how else am I supposed to reach high stuff?) and his last name wasn’t easy to spell (a necessity seeing as the Greek monstrosity of a last name I grew up with was 11 letters long).

There were people who thought our relationship would make a nice story, and those people didn’t keep their mouths shut. (From an eighth grader: “With his red hair and your brown hair, imagine your children!”)

Which made for an interesting and extremely tense year, especially when he turned a bit red whenever we talked, and especially when he made promises that could be taken in, shall we say, multiple ways. Those promises were topped off by a shockingly sweet and unexpected speech he made to me in the hallway on the last day of school.

I can’t tell you more than that here, even though the rest isn’t all that interesting. But if you ever want to meet for margaritas, I’ll happily fill you in.

Then – get this - he left the country, never to be seen again. Actually, I think he’s on his way back but I’m trying not to dwell on that.  Even worse? Like his predecessor, Synagogue Guy, he’s engaged. Which I’m only telling you in case you need to finish proving the “lid for every pot” theorem. Yeah, ouch. 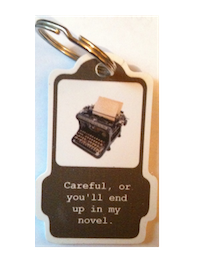 No worries though! During NaNoWriMo, the Divas kindly suggested that I import a photo of him into my Scrivener file and label it “villain.” I complied. I divided his desirable and less desirable qualities over two character profiles, and made him the hero and the villain.

Best of all, the accidental playlist scenario ended up turning into one of my favorite storylines ever. I even included a few of the songs from the original playlist into the writing soundtrack for that particular WIP, even though they’re difficult to listen to.

Do I feel guilty about any of this? Eh. . . no. That’s what you get for messing with a romance writer. He’s just lucky I don’t write romantic suspense. . .

He’s supposed to make an appearance at graduation. That should be loads of fun. Whatever happens though, I know I’ve got the divas looking out for me. If there’s drama to be had, it’ll just make this upcoming NaNo all that more fun.

Eventually, the real life elements The Divas mix into my stories fade until they’re almost unrecognizable and the heroes turn into their own people. What sticks to the page are heroes who evoke the same emotions as their real life counterparts.

And the best part, of course, is that The Divas always allow the writer to create a happy ending.

So, my fellow readers and writers, what do you look for in a hero?

(Oh, if you’d like to meet for those afore mentioned margaritas, I believe we’ve established that I’m free Saturday nights.) ♥


Melina writes contemporary romance with a pinch of oregano and a dash of chutzpah. She lives in Park Slope with her dog and a bunch of semi-imaginary divas. For her anti-vampire hummus recipe, more stories about her quest for The Lucky Mr. Mel, and her affinity for locksmiths, visit http://melinakantor.com/.
Posted by Native NYer at 3:17 AM