THEY CALL ME TIFFANY: HOW TO MAKE YOUR HISTORICAL CHARACTERS, WELL, HISTORICAL 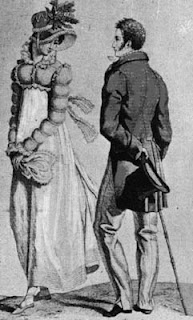 I remember well the day I gave up on historical romance. I was a sophomore in college, sneaking in a little light reading during a study break, when I turned the first page and encountered Tiffany.

Now, in real life, you could count the number of Regency women named Tiffany on zero fingers. But romance isn’t real life, and I could just about tolerate Tiffany. Her best friend was another matter. Annoyed, no doubt, by another one of Our Heroine’s spirited yet childish antics, the BFF was all, “Cut it out, Tiff!” The book hit the wall in an explosion of cheap paper, and I didn’t read another romance for fifteen years.

Now, don’t get me wrong. I’m not a stickler for historical detail. If a writer gets her dates mixed up, or dresses her heroine in a sacque gown two years after they went out of style, I’m probably not even going to notice, let alone complain. But nothing yanks me out of a story faster than a modern character dressed up in period clothing, and all the cravats and kid gloves in the world aren’t going to create a historical setting when:

(1) The names sound like a soap opera casting call. Look, I know old-fashioned names sound all boring and junk, but there’s no excuse for a Regency-era Tiffany or a medieval Chandra. Do a Google search for “baby names England 1800”. I guarantee there won’t be a Devlin or a Raven in the bunch. (And let’s not even get started on made-up names, or non-standard spellings, or females given traditionally male names such as Leslie…)

(2) The hero is “quite the” hunk. Perhaps writers are riffing off the legitimately historical expression “not quite the thing,” but the recent explosion of “quite the” (as in, Kayla considered the Duke of Dreadnought quite the rake, or Lady Topnotch made quite the fuss over Breyandra’s new hat) has the unmistakable ring of a modern person trying to sound elegant and historical. “Quite a” will do just fine.

(3) The heroine wants to, like, find herself. I mean, please. Did someone time-travel a copy of EAT, PRAY, LOVE to her bedside table? Modern navel-gazing has no place in a historical brain. (Arguably, it has no place in a modern brain, either.)

(4) The hero is either the heir or the spare. Spare me. I know it’s a hilariously witty phrase and all, but it was first coined around the turn of the 20th century by Consuelo Vanderbilt, who had just produced her second son with the Duke of Marlborough and was inspired to aphorism by the joyous prospect of never having sex with him again.

As for poor old Tiffany, I hope she found her Happily Ever After, and sent her wiseass bestie back to the 20th century where she belonged.♥


Beatriz Chantrill Williams isn’t telling whether the hero of her debut novel OVERSEAS, forthcoming from Putnam, is circumcised or not. But you can read more at http://www.beatrizwilliams.com/ and decide for yourself.