THE SOMETIMES-ROCKY TRAILS AND TRIALS OF PACING 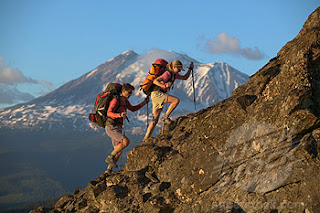 I like to go hiking with my husband. The only problems I have with it, on occasion, are the pain when my fibromyalgia and arthritis act up, the anxiety that takes hold of me when I try and traverse rocky inclines, and the fact that I sometimes have difficulty keeping up with my husband’s long-legged stride. In writing, as in hiking, pacing is influenced by a number of different issues. Some of those issues include dialogue versus exposition, change versus stasis, and choice of words and punctuation.

Dialogue versus exposition is one version of description versus action, but it’s a very specific version, because the assumption is that dialogue equals action because characters are often talking out their conflicts or plotting future plans together, and yet exposition does not necessarily indicate inaction. Exposition is everything that’s not dialogue—and that’s a wide, wide range of things that can include descriptions of characters’ actions (running, leaping, tackling criminals, and all sorts of interesting, exciting stuff that moves a story forward). While exposition, particularly exposition about characters’ actions, doesn’t necessarily fall into the trap of stasis that can so easily occur with other description, it doesn’t move pacing as quickly as the back-and-forth of dialogue can. Dialogue—the parts of a story that appear within quotation marks—has a certain immediacy that no other kind of writing within a story has. The one caveat here is that the dialogue shouldn’t be small talk that goes nowhere; it needs to consist of back-and-forth interaction involving two or more characters who are trying to advance their own goals or work out their differences. Internal dialogue, however—also known as internal monologue—which is often printed in italics, and represents a character’s thoughts, has an opposite (slowing) pacing effect compared to spoken dialogue. The magic of spoken dialogue is that the words stand for themselves—they say it all, and they say it all in the characters’ own words, without any extra sugar-coating or interpretation from a narrator.

Characters can say and do all sorts of things, but if they don’t somehow change within the course of a story—meet a goal, contend with a problem, make some sort of discovery, have some kind of revelation—the story has stasis, and the pacing slows wa-a-a-ay down. Probably the most common version of this in romance writing is the story of the couple that meets, is attracted to one another, and just keeps going places and doing things and falling deeper in love until he proposes, and she accepts, and that’s the end. When a reader sees characters who face conflicts but try compromises, or adjust their goals, or create new goals, or abandon old rivalries, or solve mysteries, or escape past tragedies, and continue on, what they’re seeing is character growth and change—and this growth and change keeps the pace moving.

Finally, the poet in me can’t resist a brief discussion of some of the ways in which line lengths, word choices and punctuation can affect pacing. Short lines, or at least short paragraphs, lead to fast pacing. Long paragraphs are often long because they include more description than dialogue; this results in slower pacing—which can be all right if you’re aiming for the story to have a more relaxed mood in that section. Alliteration, consonance, and assonance, which are three different types of sound repetitions (of beginning consonant sounds, consonant sounds within words, or vowel sounds within words), are all great ways to give a subtle sense of urgency within a sentence. Any stop-mark you use in punctuation—whether a comma (,), an em dash (—), a semi-colon (;), or a period (.)—slows the pacing; that’s one reason that publishers these days are reducing the use of complex sentences and even commas wherever they can.

If you understand those elements in writing that can cause a story to move slower or faster, then you will not only have the power over the pacing in your writing, but you will be able to use pacing to achieve exactly the effect that you want your writing to have upon your readers. Then, if you’re like me, you may want to celebrate your well-paced writing—I suggest enjoying a hike. ♥

Margaret Birth is a Christian writer who has been widely published in short fiction, short nonfiction, and poetry, and is currently drafting a novel called A FAMILY FOR FAITH.