Welcome to RWA/NYC’s Heroine Blog Tour.
This week, we are interviewing Heroines from New York’s Leading Romance Authors.  Some are candid, some are funny, all are wonderful.  We know you’ll fall in love with each and every one of them.
(Psst--watch for their Hero’s interview next month!) 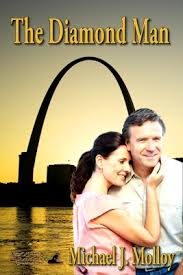 Q:  Are you a girly girl or a tomboy?

Having grown up with two brothers, I guess that girded me to become more of a roughhouse person like them. So, yeah, I guess that qualifies me as more of a tomboy. But I’m also comfortable wearing a great looking dress to show my feminine side.

I work as a head manager for a national human resources recruitment firm. I help people with executive, computer, and engineering backgrounds find well-qualified jobs for them. I was very lucky that when Jim, his daughter Madison, and I moved to St. Louis, my company allowed me to keep my position with the new office there.

I learned since I was 14 that I was incapable of conceiving a child. It didn’t bother me then, but as I became older I would hear about girls I went to school with becoming pregnant as women, and that caused me to become depressed. But the biggest hardship was when after I was proposed to by this guy I was dating years ago, he took away the offer when I told him I couldn’t have a child. He got ticked off about it and called off the wedding. I cried for days, weeks, even months after that. I thought I might never get that chance again, until Jim thankfully walked into my life. He just took me for what I am. How much better is that?


Q:  Just between us, what do you like best about Jim?

His honesty. That by far is his biggest trait. Also, Jim doesn’t put on any airs. What you see is what you get. And Jim is very modest. He’s not one of those Mr. Macho guys. That to me would be a major turnoff. Of course, his handsome looks and muscular arms and shoulders are awesome. I also love his surprises and how he thinks outside the box. I’ll let you in on a little secret. Would you believe Jim proposed to me while we were taking a bubble bath together? How many women do you know of get proposed to that way? I thought it was great!


Q:  Do you prefer the bedroom door open or closed?

When Jim and I made love to each other in the beginning, the idea of the bedroom door being open was not an issue. But since we got married, and have Madison living with us, maybe the two of us might like our privacy. Of course, Madison is 15, so if she were to enter the room while Jim and I were doing it, I don’t think she would be fazed by it, nor would we be totally embarrassed.


Q:  If your story is made into a movie, what actress do you want to play you?

Oh, wow! Good question. I never gave it much thought. I have some people say I look a little like Andie MacDowell. But maybe I might prefer Maggie Gyllenhaal.