WELCOME TO BOOK COVER FRIDAYS!
Every week we bring you an exciting hot book cover from
one of New York's Leading Romance Authors. 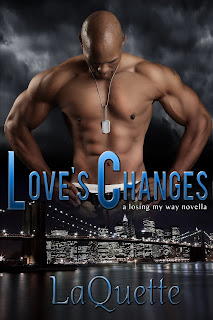 LOVE'S CHANGES
A Losing My Way Novella
by LaQuette
www.laquettelikes.com

SUMMARY:  A near-fatal shot through his chest teaches Lieutenant Bryan Smyth of the NYPD two things: He wants to see more days and he wants to spend them with his estranged husband, Justice.

Poor decisions made under the strain of grief split the seams of their marriage. Now it's up to Bryan to show Justice there's still enough of their love left to salvage from the ruins, still something worth the battle ahead.

Bryan's shooting has opened Justice's eyes to new lessons too. The first, tomorrow isn't promised, the second, life's too short to live in misery. Justice has watched Bryan shuffle back and forth attempting to balance the man he is at home and the man he has to be at the precinct for too long. Now, he's done. The only problem is, Justice's heart is having a hard time adhering to the exit strategy in his head.

Desperate to repair their bond, Bryan does the only thing he can to keep his marriage intact, he calls his crazy sister-in-law, True to stir up some organized chaos. She's a wildcard, yes. As unstable and deadly as nitroglycerin, but she gets the one thing Bryan needs more than anything, results.

The only question left: Is family and fidelity enough to get them through love's changes, or is this really the end?