Every week we bring you an exciting hot book cover from
one of New York's Leading Romance Authors. 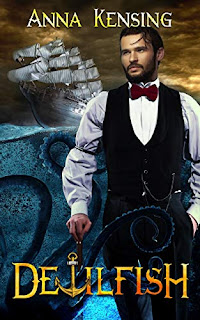 Prosperous merchant Elliot Bishop has built a safe life in Port Townsend, Washington. The family business is thriving, he’s engaged to be married, and he’s not about to let his rogue stepbrother’s sudden return home disrupt his plans. But when his fiancée disappears under the same mysterious circumstances as his mother did years ago, and his childhood nightmares about octopuses reoccur, Elliot senses someone—or something—took both women, and now it’s after him.
Captain Declan Fitzgerald finally has his own ship and crew, but he’s still governed by his father’s obsession, hunting the thing that took his stepmother, and now Elliot’s fiancée. Declan will protect Elliot from whatever’s calling him from the ocean’s depths, even as doing so reignites his feelings for Elliot.  As Elliot surrenders to the call of the moon and tides, he gives in to Declan, who anchors him while Elliot changes in ways his childhood nightmares never prepared him. Sex with the new Elliot is better than Declan imagined, if a little different than he expected. Declan has always been willing to sacrifice everything for Elliot, but what must Elliot give up to choose Declan?

New comments are not allowed.