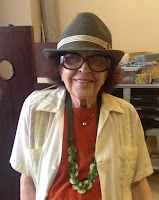 If you knew Irene Weissman as I did, you couldn’t help but love her. She had an irrepressible laugh, a great sense of humor, a warmth, and a quick wit which she maintained long into her later years.

Born into a family of Russian immigrants, Irene was named for Irene Dunne. She told me that there were many doctors in her family including a great aunt who challenged the anti-Jewish and anti-women regulations for women doctors at that time in Russia. The story which she relayed would have made a good movie, and I wish that she would have written it.

However, Irene’s heart was set on becoming a teacher. She was devastated when she learned that it wasn’t possible due to her hearing disability. That was truly a shame, because Irene would have been a fine teacher.

As one of the charter members of the New York City chapter of RWA, Irene Weissman contributed her time and talent to working for the chapter in a myriad of ways, from helping to distribute flyers at a national conference, to offering to read and critique in writers’ groups, attending and helping to set up several writers’ conferences, and being supportive of her fellow members. She brought a bubbly personality and enthusiasm to the group, and I felt fortunate to have known her as a member.

We attended writers’ conferences in New York City and New Jersey, and we went to the New York City RWA chapter’s first writers’ retreat in Ocean Grove, New Jersey. The weekend provided both a respite, a social time, and a chance to work or at least plan our writing.

While I worked on a woman’s fiction about a young Irish immigrant, Irene worked on her historical romance set in the Edwardian era in New York City. As many writers do, we bounced story ideas with one another. She often gave me suggestions on the writing, but her most sage advice seemed to be on life. You need to find the joy in life, and to be able to laugh is important. I had been going through a rough patch at the time, and that really lifted my spirits.

Age seemed irrelevant with Irene. In fact, I never knew how old Irene was, so when she told me I was truly impressed and inspired because she had so much youthfulness despite being in her nineties at that time. She came to the writers’ conferences, the after conference parties, and had everybody at her table laughing with her funny lines. She seemed to have a smile for everyone, and her fancy haberdashery seemed to garner attention, particularly from young men. I loved her wide brimmed sailor hat and her vintage style hats which all looked good on Irene.

It meant a lot to me when she came to my first book signing for my first published book, Angels Among Us, at the Nutley Public Library in New Jersey, and to a reading from my book Sacred Fires, which I did at one of our chapter meetings. She also helped me to set up a book fair at the New Jersey RWA conference sometime ago. Always offering words of encouragement and suggestions for getting publicity, Irene was one of my favorite fans and a good friend.

For a time, I would meet Irene for luncheons at restaurants in Manhattan, but when she grew too frail for such outings, I along with fellow chapter member, Carolyn Gibbs, would visit her at her apartment. We would bring sandwiches, soups, and dessert. It meant so much to her and to us. Unfortunately, when COVID struck last year, it became impossible to meet in person, though we stayed in touch by phone. We were to celebrate her 100th birthday in 2020, but couldn’t because of the pandemic, and then we hoped that she’d make it the next year and we could celebrate in April 2021, but she passed just two days shy of her 101st birthday.

According to her obituary, “Irene led a full and active life, embracing many interests, including singing, writing, Tai Chi, and OATS, as well as the New York Amateur Computer Club, on which she served as a member of the Board of Directors.

I imagine that there must have been a big celebration for Irene Weissman in heaven, and that her beloved husband, brother, and parents who passed long before she did, were there to celebrate with her. I also think that our friend Michael J. Powazinik, chapter president in 2000  - 2004, who passed away in 2008, would be giving our Irene a big hug. Kathryn Hayes, a founding mother and first chapter secretary, would be there, too, to exchange stories and laughter.

There was no one quite like Irene Weissman with her stylish hats and fashionable accessories, keen wit, storytelling, and fun-loving nature. She will be missed. God bless Irene.